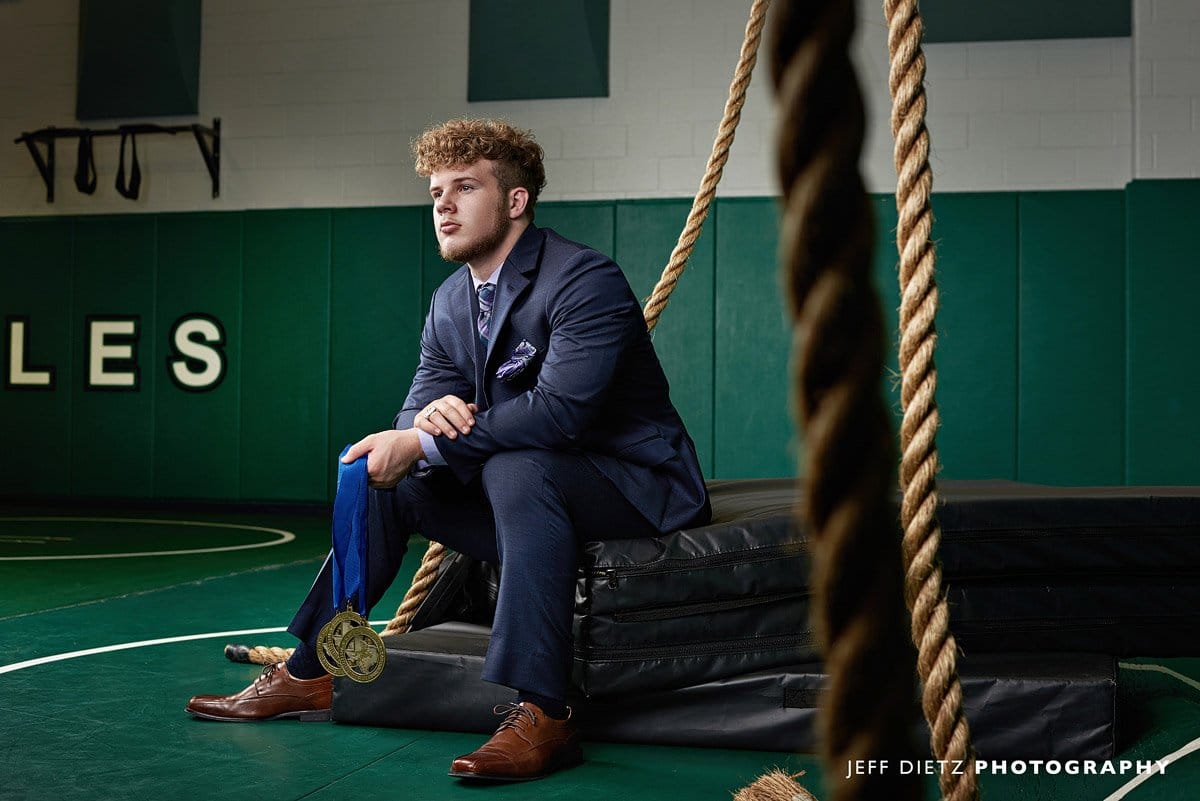 Rylan is a senior for Prosper Wrestling and came to us for his Fashion Sports portraits. This photoshoot was a ton of fun. I really enjoy going to new places for the first time. Getting to explore and create ideas right on the spot is a rush. These portraits were taken at the wrestling room at Prosper High School in the old building that is now administrative offices.

We decided to take Rylan’s photos in the wrestling practice room at the Prosper High School. It’s ‘old school’ high school in its style and I love it. When you enter the room, it’s filled with green mats on the floors and walls in Prosper colors.

It brought memories back to my time in college when I was in Martial Arts and worked on similar mats. What jumped out at me right away were the ropes hanging from the ceiling as you see in some of the photos below, and the mats that were piled in the back of the room. I also loved the words Prosper going across the back of the wall and the Peagle.

I know that would look great going across the page of Rylan’s senior portrait album. 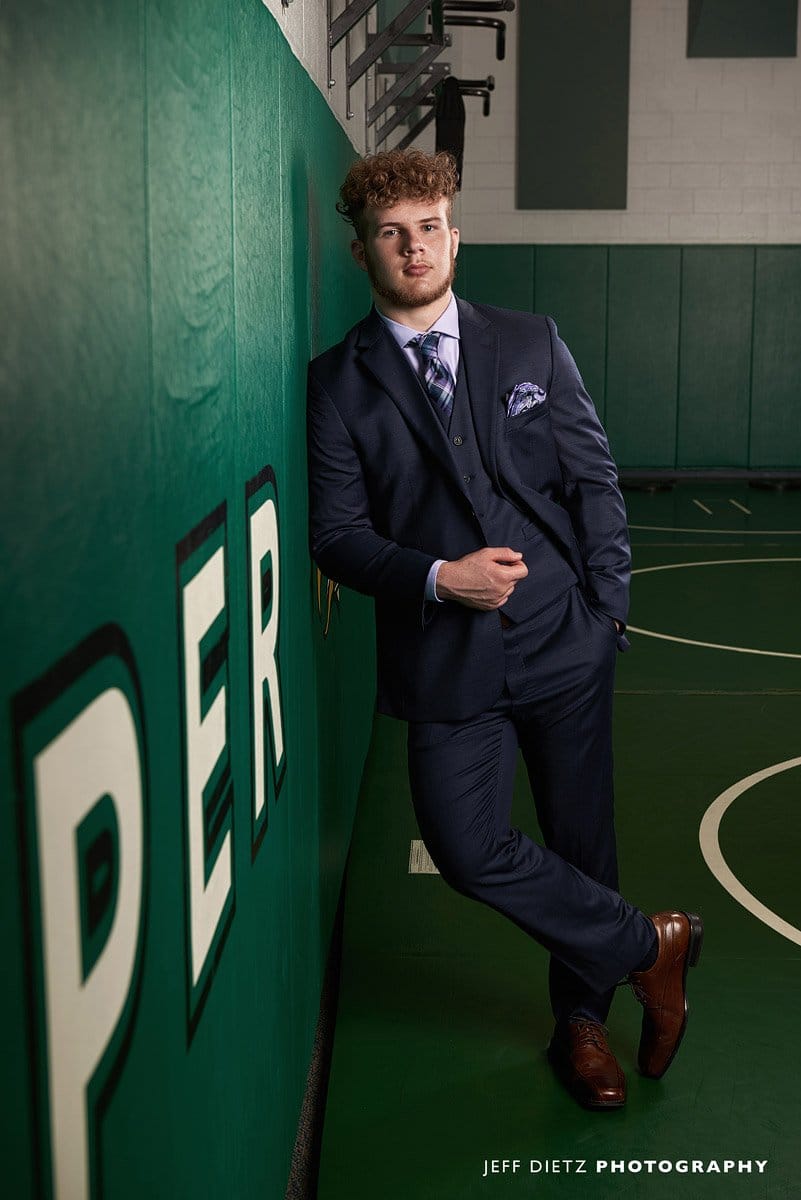 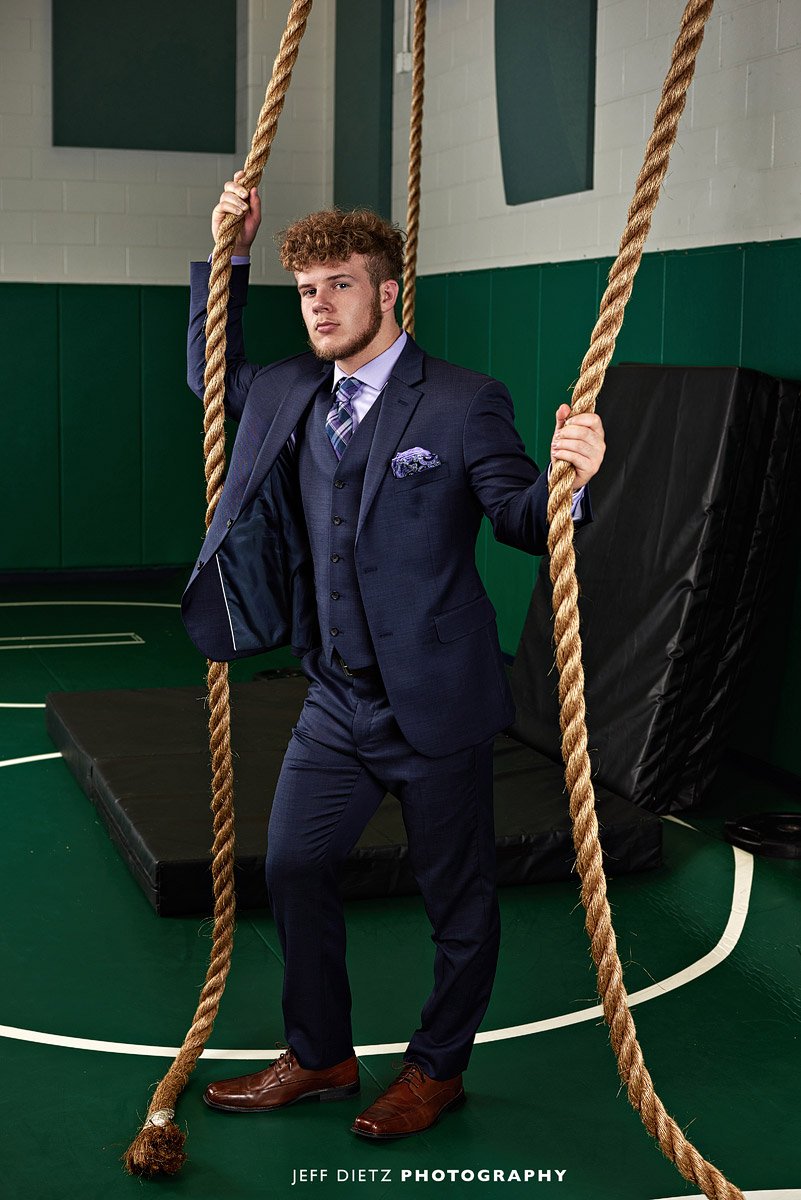 Rylan’s outfit looks sharp and fresh with a dark blue suit matched with a light purpose detailed shirt and a bolder purple plaid tie and pocket square. One of the nicest parts about working inside the gym is that we weren’t in the 100 degree heat. This made it much more comfortable for Rylan to add in the vest to his suit look.

The brown dress shoes really look sharp with the navy and blue suits. The color in the shirt is subtle, allowing it to accent the navy suit without being overpowering.

If you walked into this practice room, to your eyes you would think that the lighting would be no problem This is deceiving as our eyes can see a lot more than a camera can capture.

To recreate the environment and lighting of the wrestling room it took our vast knowledge and experience with lighting. In this photo above there are actually 4 lights being used. Not only did I have to light Rylan properly but also the gym and background needed its own lights.

Funny side note from behind the scenes. I had to cover the feet of all of my tripods with tennis balls so that they did not rip into the soft tops of the gym mats.

A Rare But Awesome Uniform Shot

We don’t do a ton of uniform photos and action shots (although I have a really cool one coming up soon). We photographed a few in both the white outfit and the green. The green balances great with the background and gym colors.

This shot is mid-action in a starting position. The lighting is awesome and I love how we got the word Prosper in the back on the wall mats. 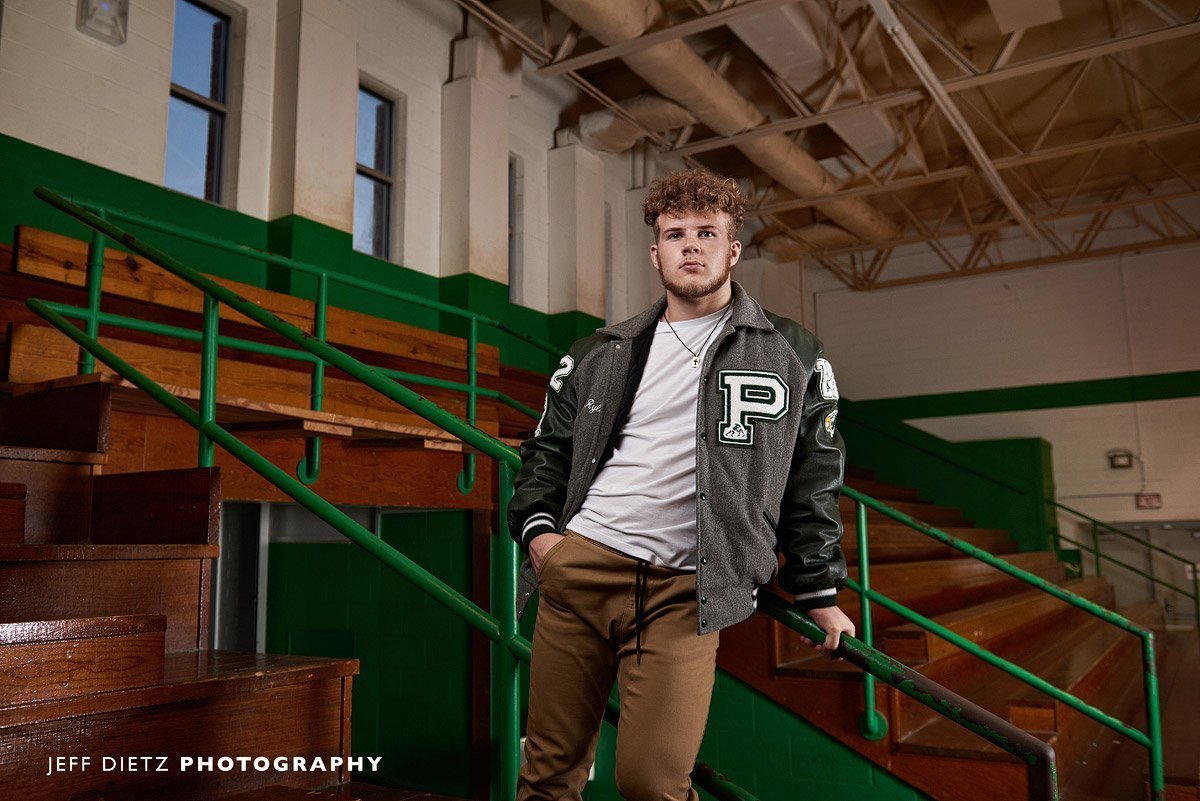 The Old Gym in the Admin Building of Prosper High School

Isn’t the look of this gym awesome? It brings you back to the “old days” before all of the schools became so ultra-modern. The wooden bleachers were always great and created such an awesome environment for basketball games as everyone could pound on the bleachers.

We got access to this gym towards the end of the shoot for Rylan’s photos in his Prosper Wrestling letterman’s jacket. The colors worked perfectly from his tan pants and the grays and greens in the jacket.

This was also a very tricky room to photograph in. The background was completely dark until we mixed in an additional light to fill in behind him. 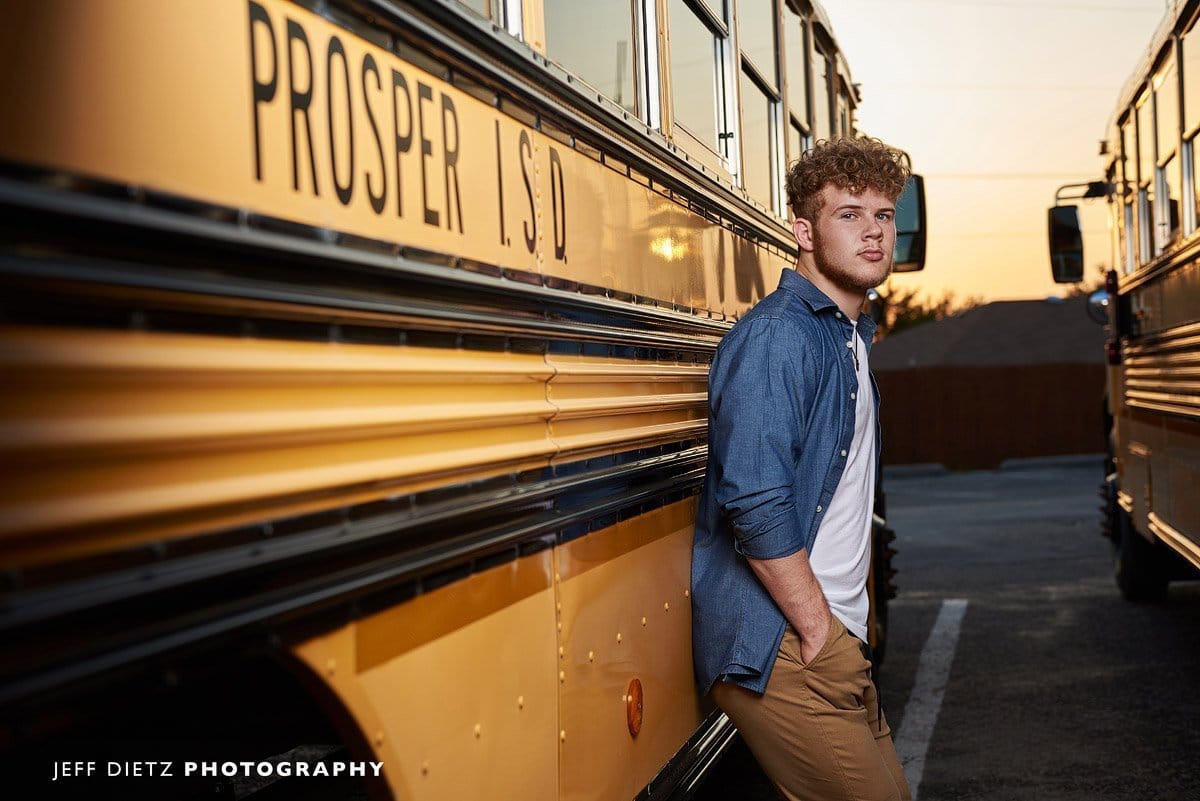 This series of photos almost didn’t happen. When we went to go to the second part of the gym location, the doors were locked. We were fearing we were not going to get inside and have someone open the doors. So I had this quick idea to pose by a line of the school buses that were parked in the lot.

The sun was setting behind them and it created some interesting lighting through the buses. With the right angle, we could also see the Prosper ISD logo on the side of the bus.

Later, when we were reviewing the photos with Rylan and his family, these actually became some of his favorites! That’s a lesson for when I say “I have an idea”, just roll with it. Sometimes it doesn’t work, but sometimes it can end up becoming some of your favorite photos. It’s all about being creative.

Below you can see more of the photos from throughout his 3-hour photoshoot. His album is set to arrive as well and I hope to be able to make a separate blog post soon showing you our amazing new albums! I can’t wait to see it!

If you are ready to schedule your Fashion Sports Portrait or Senior Portrait, please follow this link to fill out the form below, or call us directly at (214) 998 – 7001. 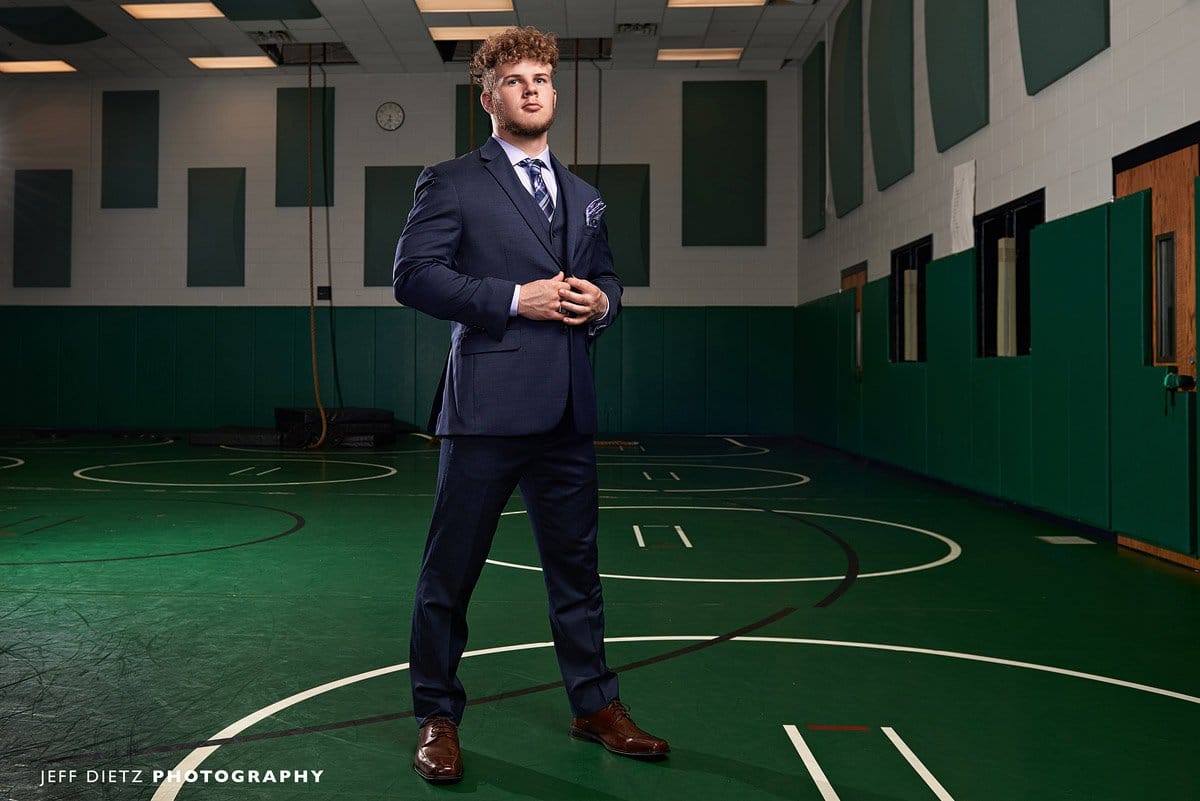 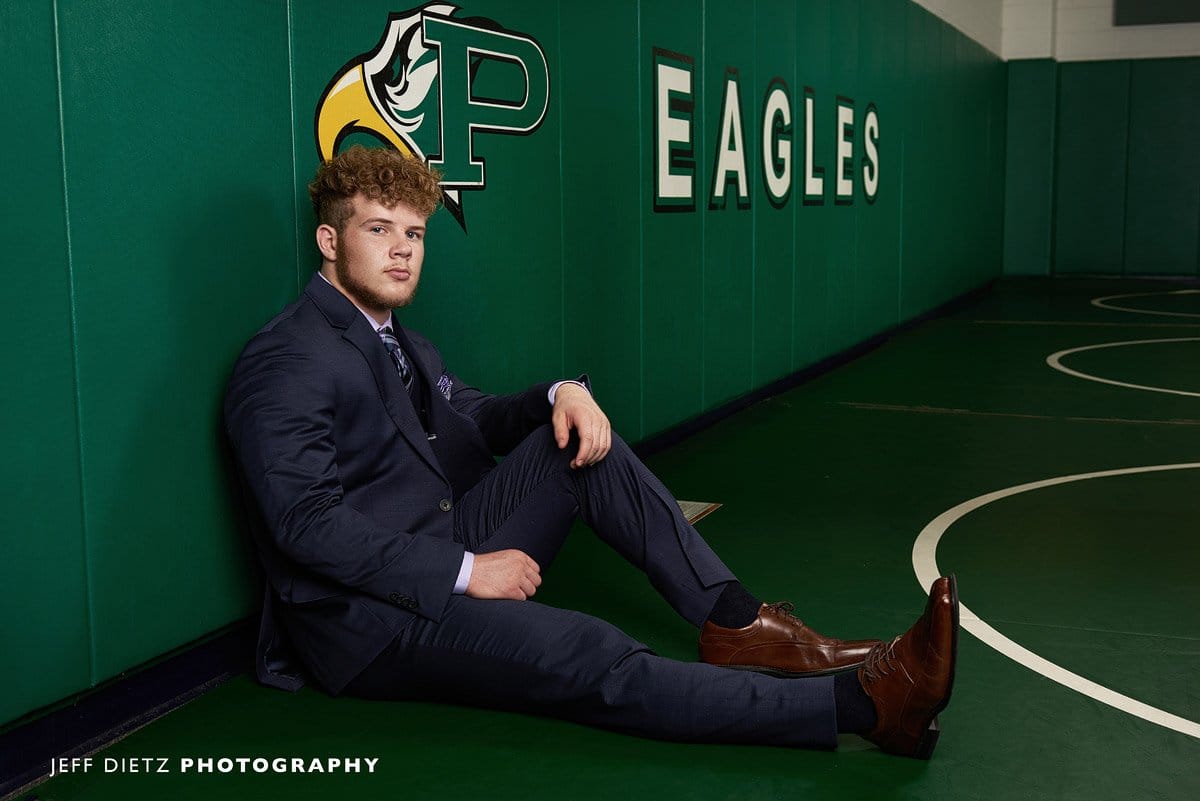 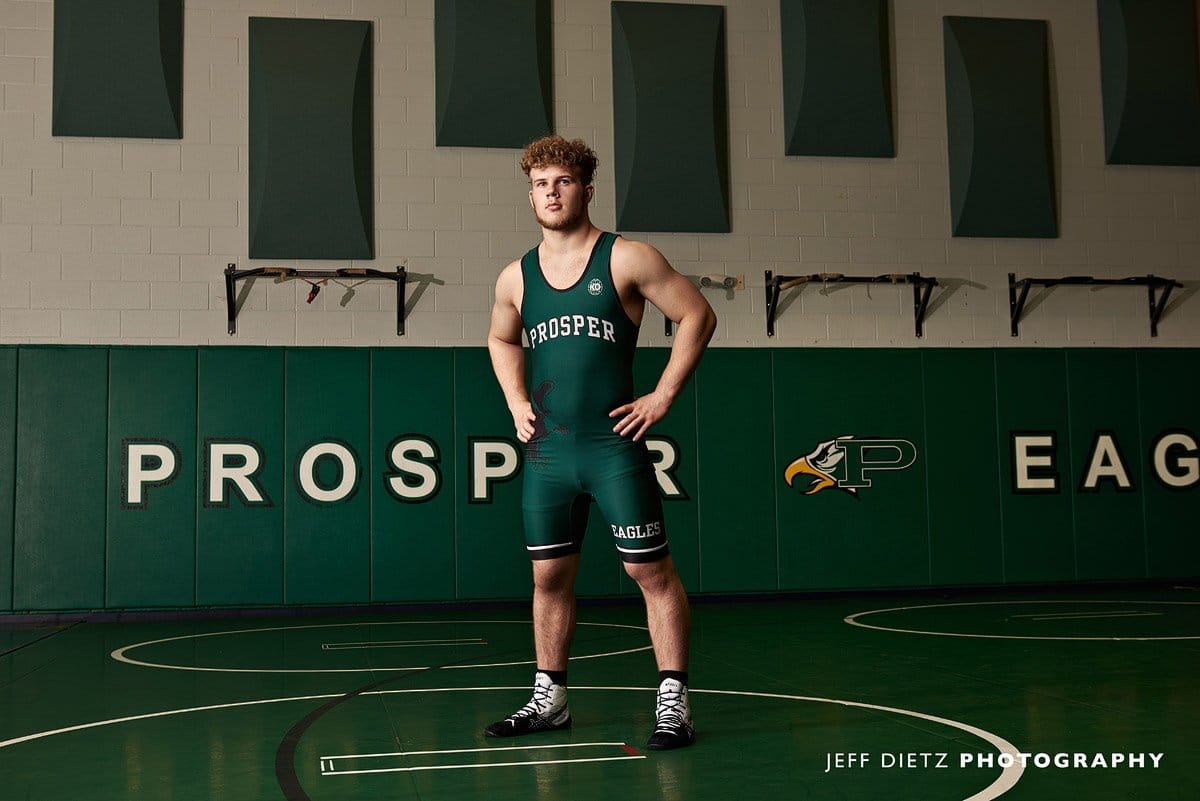 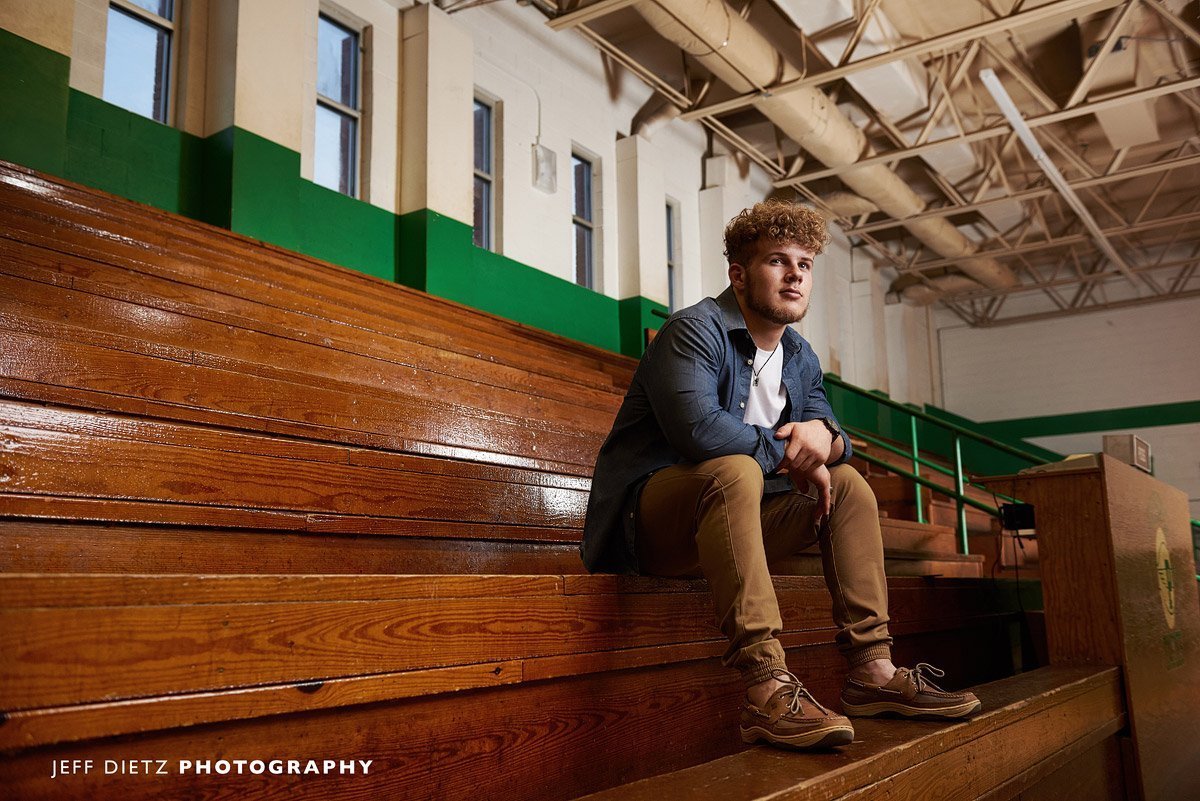 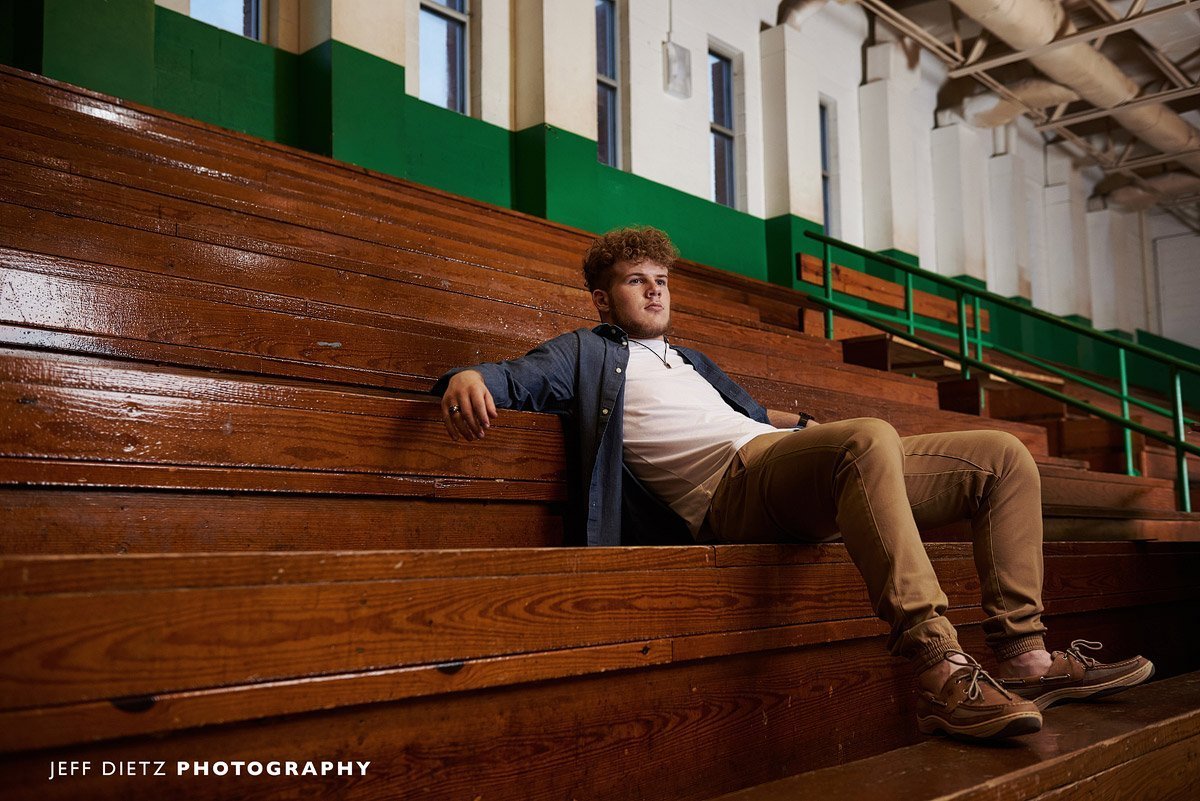 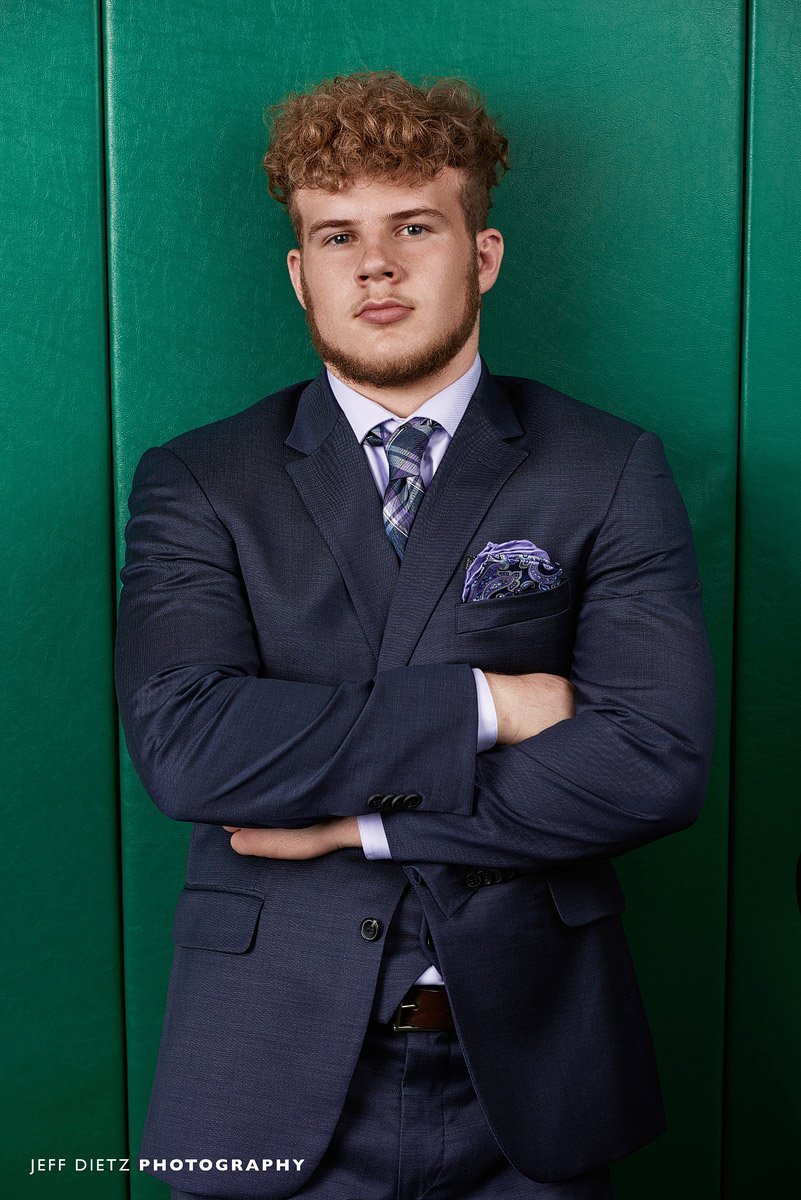 Student Athletes on this site do not represent an ‘endorsement’ by those athletes and they are subject to same prices as offered to anyone.

Jeff Dietz is the #1 Prosper Senior Photographer. We also serve Prosper, Prestonwood Christian, Southlake Carroll, Allen, Celina, Highland Park, Rockwall, and McKinney where we are based. 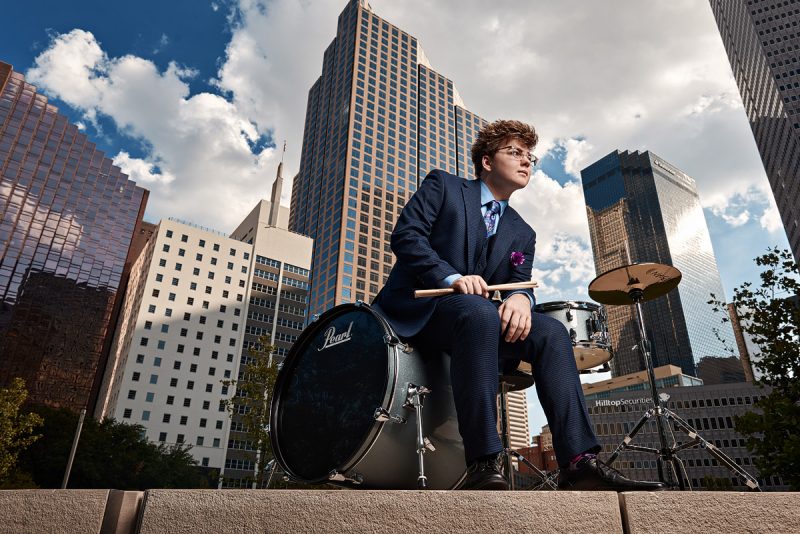 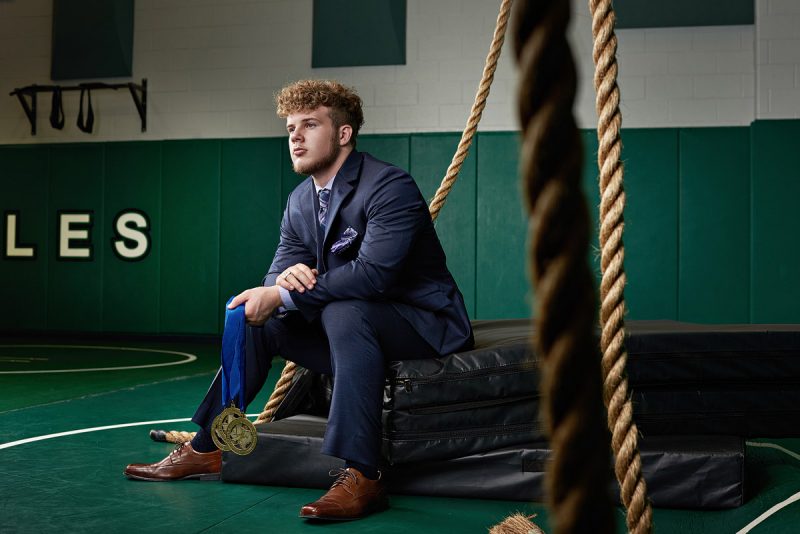 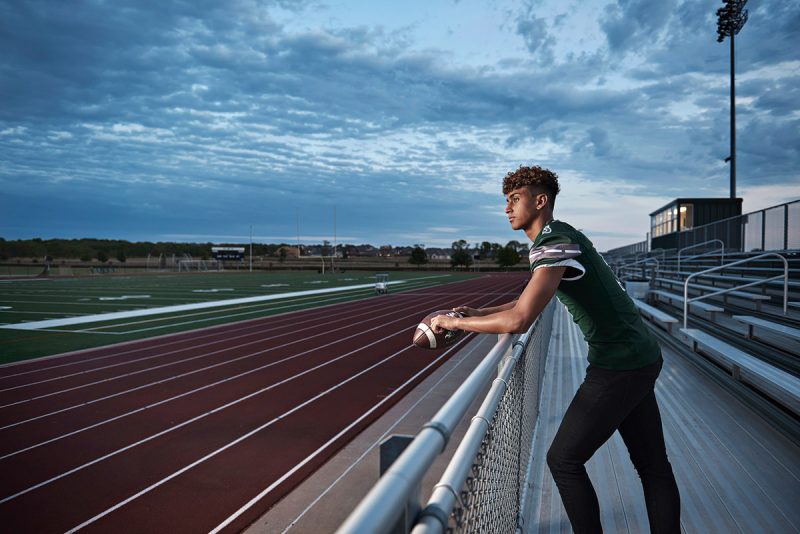 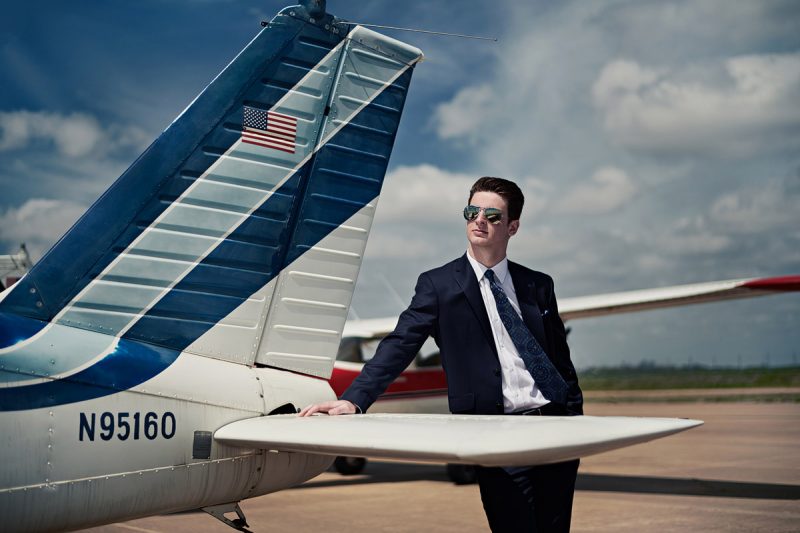 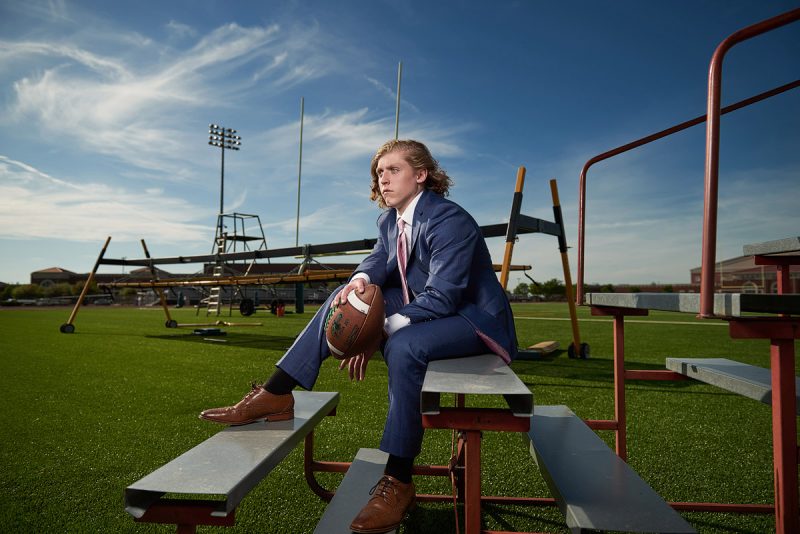 Sam | Prosper Senior Pictures | Back on the Football Field 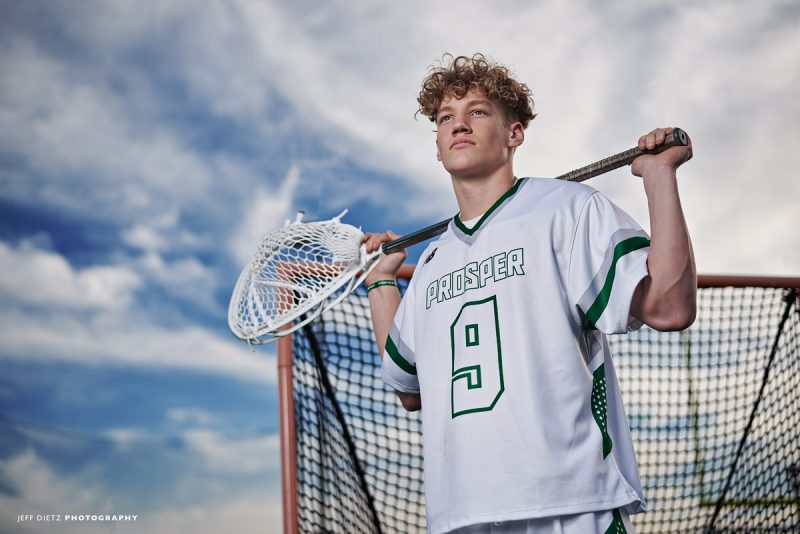 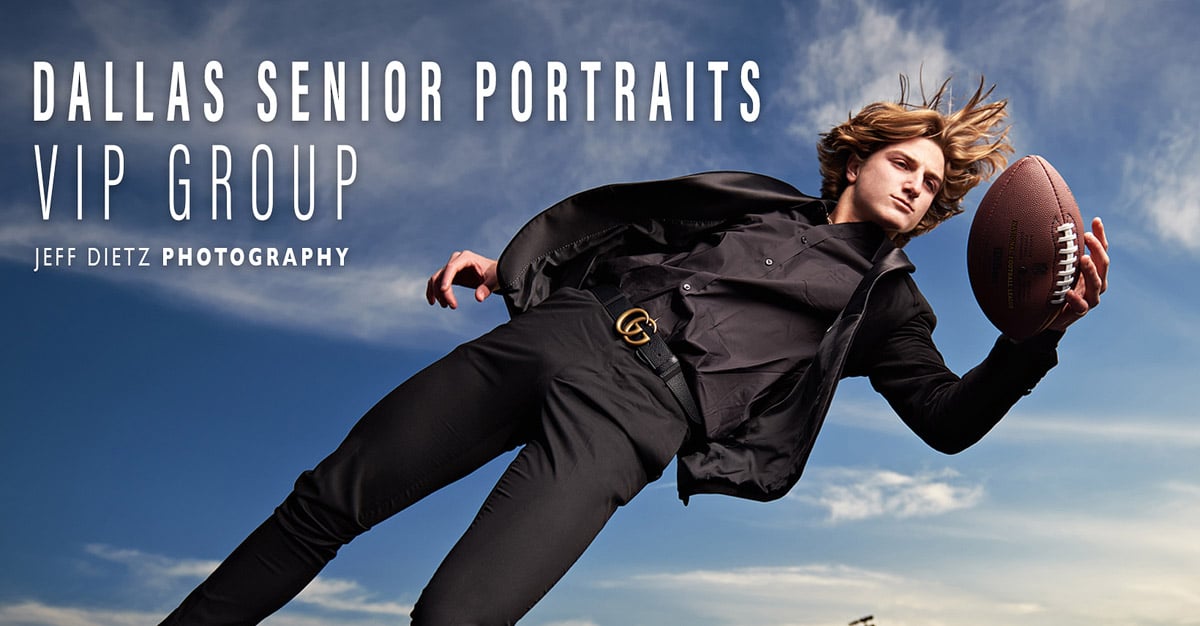